This past Friday on April 16th, I awoke early and decided to go wait in line for my first vaccine shot at SF Gen (as it’s locally known — you may know it better as Zuckerberg San Francisco General Hospital). I became eligible when San Francisco opened up vaccines to those 16 and older on April 13th, two days ahead of California’s date of April 15th. Happy Tax Vax Day!

In the days before I had tried to find an appointment through the MyTurn website. As with all technology-based reservation systems, trying to get a vaccine in a region like the Bay Area and San Francisco, in particular, was going to be hard.

Adherence to Covid protocols has been high, and the city has done very well in mitigating hospitalizations and deaths. It undoubtedly says a lot about the populace of this city — educated, liberal, progressive, and given its tech-oriented nature and place in Silicon Valley, science-driven.

If San Francisco loves anything, it’s getting hard-to-find reservations.

If San Francisco loves anything more than that, it’s waiting in lines.

I arrived at SF Gen at about 8:25 am. 35 minutes before the doors open. The hospital was allowing residents of certain zip codes in the neighborhoods surrounding it to do walk-ins for a vaccine. I was originally hesitant — this opened up the week before on Friday, and the news reported that on the day following — Saturday — 6,000 people lined up for the 2,000 a day vaccine allotment they had.

This wasn’t news per se — lines at the Moscone Center (you may know it from many a large conference — e.g. WWDC), a mass vaccination site, were long, and that was for leftovers! Moscone is an appointment-only site. People (and even some friends) were going to their local CVS/Walgreens/Rite-Aid and waiting till the end of the day for any leftover shots from Janssen/Johnson & Johnson.

The eagerness of San Francisco’s inhabitants to get vaccinated gives me some pride to be a resident of this city.

At 9:45, after some 70 minutes of intake, a few checks, registration, and waiting, I received my shot. A lovely Black nurse administered it. She was joyous, full of life, and greeted me warmly with that hospitable enthusiasm that only Black women have.

I asked her if I could take a few selfies to mark this momentous occasion. She replied: “Go ahead, it’s a free world baby!” 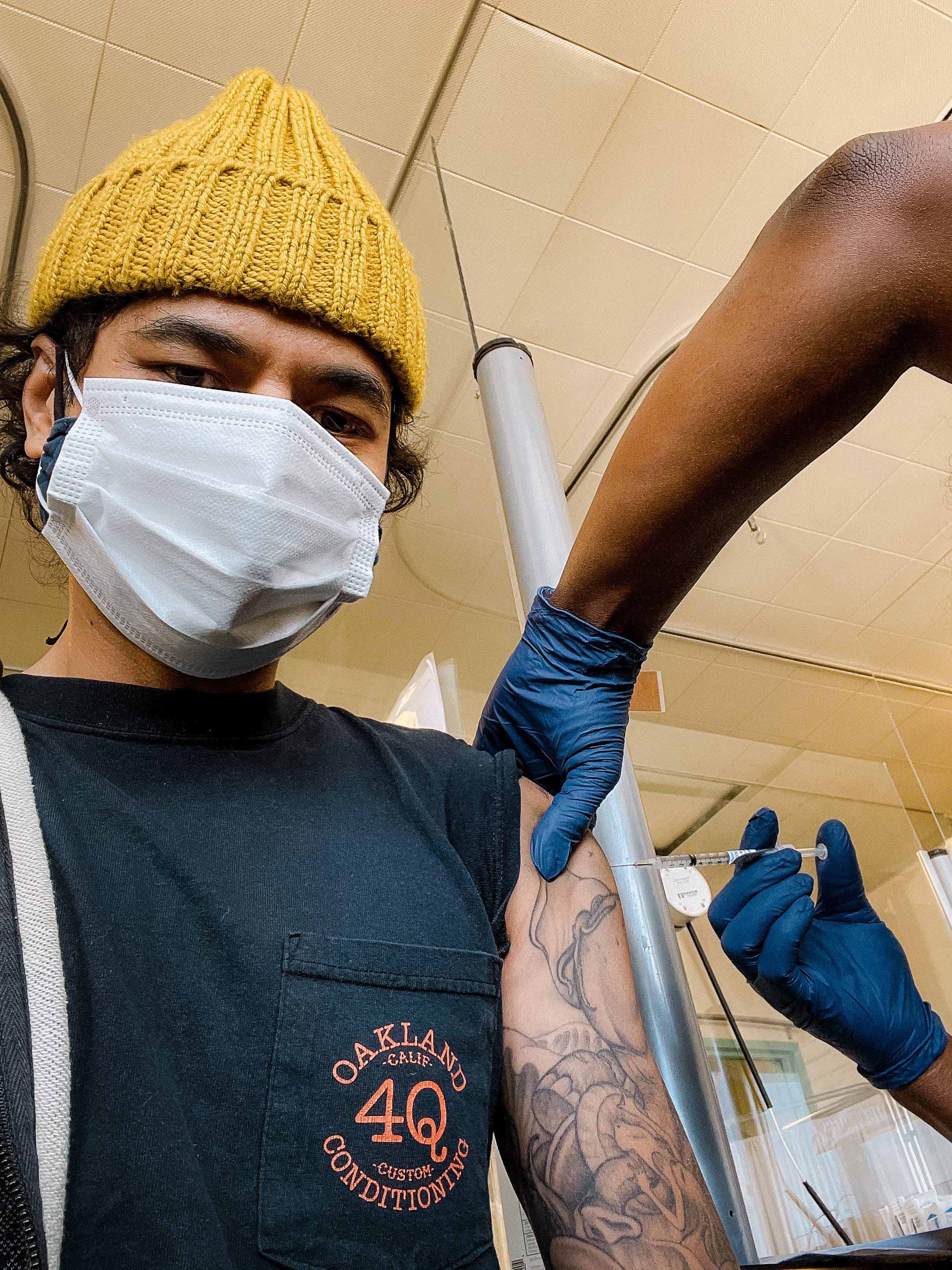 So many heart emojis.

She injected the Pfizer-BioNTech, asked me if I got enough photos (yes), applied a band-aid, and told me to hang out in the waiting room for 15 minutes. If I was feeling off, let a nurse or attendant know, and if I felt good, I was free to leave at 10 am.

Just over an hour and a half later from start to finish, I was done. My next appointment is scheduled, and this time there’ll be little waiting, as appointments get priority.

The relief, solace, and ray of light that was given to me, by those Black arms and hands was more than I could convey at the time. It will forever be a moment I remember.

The Friday before shot no. 1, Jen and I drove up north to Mill Valley to celebrate Tyler’s birthday at Hook Fish Co. at Proof Lab. It’s a beautiful outdoor space and along with Tyler and his wife Mandy, our friends Emma and Jon also joined. Barb was also in tow.

At that time, between the six of us, four of us had been vaccinated. Jen had already been fully vaccinated, and only Mandy and myself hadn’t but Mandy had an appointment and I was figuring out how to get one. And now, we’ve all had vaccinations, with Tyler having received his second dose this week.

This morning, Monday, I woke up feeling strange. Like my body wasn’t quite in sync. Something felt strange.

After dinner, I voiced this to Jen. We started to discuss it and I quickly concluded that I was suddenly playing catch-up to life shifting to a new normal. We aren’t out of the woods yet, but this weekend alone, we ate out at a restaurant (outside on their patio amongst other people, unmasked), I helped Tyler out with some truck maintenance (outside, unmasked), and Jen, Tyler and myself then went over to Hayes Valley afterward and grabbed a snack at a restaurant and sat outside at their outdoor dining set-up in the sun, surrounded by a bunch of people.

The city has strangely never felt more alive since this year started. Outdoor dining has been a real boon to the social make-up, aesthetic, and vibe of San Francisco. It’s never been an al fresco dining town — nights are cool or foggy and outdoor spaces have always been a rarity and premium due to archaic and expensive city regulations and permits. On the warmest nights, any place with a patio becomes an instant hotspot and ice cream shops see their largest revenue days as lines form but those days are rare.

But now, like a butterfly, San Francisco has escaped its indoor cocoon. There are slow streets, streets closed off on the weekends for more outdoor dining space and pedestrian traffic, and people are outside making the city look like the city I imagined a Californian city to look like in my youth.

The pandemic isn’t over, and the disparity globally is still astounding. In some countries, fourth, fifth waves. Shortage or lack of access to vaccines. Being the global superpower that we are, we have the purchasing power, and vaccines are rolling out, leapfrogging the countries that staved off the virus early on. In some places, even the privilege (or irresponsibility) of turning it down is unsurprisingly American.

And it’s this awakening that resolves itself in me as a kind of culture shock effect.

That for a year, we stayed indoors, keeping our distance, and hiding away from each other.

In what feels like all of a sudden, here in San Francisco, we’ve bared ourselves, transforming out of that year of hibernation and growth, and are testing our wings, maybe a little unsure of where we are and what has changed. We’re taking cautious steps as we acclimatize again. Personally, I’m recovering from a bit of whiplash, as I become comfortable in my environment again, alongside my fellow citizens.